There’s been a lot written about this over recent years, I’ve read some articles, disregarded others and didn’t honestly pay that much attention to it. Foolishly perhaps, given the growth in this as a ‘business.’ Then, a couple of years ago, someone who had written many articles on the subject contacted me for an interview which I thought was a little odd. You see, despite having travelled alone around India for around 20 years, I never considered myself a ‘solo female traveller.’ On all of my trips to India between 1998 and 2006 I was traveling for work, so of course no one could accompany me, or was likely to want to; 19, 20, 21 day trips, a different destination every night, checking out the sightseeing and cramming in several hotel visits in between just didn’t appeal to those who could only take 4 weeks holiday a year. I loved it. But you see, I was always met at the airport by a representative from my local office, escorted to my car, introduced to my driver, the itinerary gone through and I was on my way. More often that not, given that I was a tour operator, some say ‘of repute’ others of ‘ill repute’ I was met at each hotel and wined and dined and on occasion, oh okay then, frequent occasions, rather spoiled.

I’ve met fascinating people, lords, ladies, royalty, ridden priceless Marwari stallions, had picnics the likes of which haven’t been seen since the days of the Raj, private dinners in rose petal strews dining rooms, champagne breakfasts, musical performances laid on exclusively for me in the middle of deserts, you name it, you see what I mean by ‘rather spoiled.’ In between all this, I had private guides to escort me, sometimes bore me, the odd brave soul who tried to make me shop but all of whom were there to ensure I got around safely and somewhat better educated on the topic in hand than I’d been before. Have I ever felt alone, threatened, unsafe? No, never, not for a moment.

And this, at a slower pace, and possibly with not quite so much attention, is how the luxury client travels and so, is India safe for solo women travellers, well in this instance, I’d have to say, yes!

Yes, I got hit on occasionally, such is the nature of this industry, but being a woman of very little self-belief, I never took this seriously and have unfailingly managed to fob these attempts of by either ignoring them of laughing in a ‘Me? You’re hitting on me? You’ve GOT to be kidding!’ kind of incredulous hysteria. You may as well have told me I was a Kate Moss lookalike. Preposterous beyond belief, and not just because I’m a foot too short. I have been led to believe that some travel agents/tour operators/tour guides are rather partial to such attentions. However, I choose to leave this there. Each to their own. The fact is, the choice of yay or nay is there.

Since then, I have lived in India for going on 13 years, alone. I have run a lodge in Kanha National Park alone, I have lived in Jaipur and Delhi, alone and I have traveled somewhat more adventurously, yes, you guessed it, alone! Perhaps I’ve been lucky, perhaps I have a ‘Don’t even try it mate!’ demeanour but rarely have I had a bad experience. If anything, being a single white female, I’ve been looked after. When I’ve been stuck, on one occasion at the side of the NH8 after a bus crash, the other passengers took me under their wing to ensure I knew what the contingency plan was and to ensure that I arrived at my destination safely, bus driver skill set permitting.

This was not a one off, many other such occurrences have taken place and in a country where ‘Guest is God,’ this is not uncommon. I once got escorted out of a protest I had unwittingly wondered into in deepest darkest Rajasthan, in an area which did have a reputation for not being incredibly safe, by a man on a motorbike. I’d made two phone calls to friends asking for advice and who both said, ‘What the hell are you doing there? It’s not safe, get out immediately.” At this point, I got out of the car to buy a bottle of water when I was promptly approached by a man who reiterated my friends’ concerns by saying,

‘Excuse me madam, but you shouldn’t be here,’

He glanced around and, looking at my car smiled and said, “Is this yours?’ I beamed as proudly as a mum on sports day and nodded in the affirmative. The next one hour saw us having great fun pitting Ambassador car (mine) and motorbike (his) as we hurtled (selective memory) cross country and out of the situation. However, once in safety he didn’t abandon me but insisted on speaking to the owner of the hotel I was trying to reach to ensure that I was on the right trajectory and continued guiding me until he was certain I couldn’t get lost.

However, I am not stating that to travel as a woman is 100% safe in India. As mentioned, it’s my hood, I negotiate it confidently, I have a bravado in my demeanour and I know not to feel that I have to be polite in certain circumstances.  There are various things you need to get used to and ways in which you can help yourselves have a great trip.

There is the option to book through a reputed operator. I’ve arranged trips for solo women who have had a great time. I put them in homestays in Delhi where they were taken out to markets, to the local temple and gained an insight into Indian culture, in Agra they have learnt about cooking home cooked meals and in Jaipur sent a horse riding friend of mine to a place where I know the owner is a keen horseman and there is nothing he doesn’t know about the Marwari Horse, a breed we are unaware of in the UK. Choose wisely and it can be a hugely rewarding experience! I think a carefully chosen home stay is a brilliant choice for a solo traveler, but then also you know yourself. You’ll know whether you want to be sociable or not. I love the interactions in these smaller places but sometimes, I want to be anonymous and will stay in a more traditional, international style hotel for this.

Over the last 13 years since living here, I have taken public buses, trains and regularly take autos, I have met some fantastic people. In fact, two of the people I can rely on the most in India are my regular taxi driver in Delhi who I chanced upon once by taking a local black and yellow cab and my auto driver in Jaipur, who rescued me from a braying mob of auto rickshaw wallas (a possibly exaggeration) at Jaipur train station and has been the most faithful guide ever since. I happily recommend them both to all my single lady friends and clients who are traveling.

I’ve stayed in budget hotels as well as luxury with seldom a circumstance arising that I have felt uncomfortable with. As I have mentioned, I do appreciate that I have a bravado that most don’t have, the ability to play dumb with a frightening lack of effort, and tend to be able to circumnavigate most awkward situations with relative ease. These factors doubtless ease my journeys around the sub continent. I actually prefer traveling on my own now, I tend to be more adventurous and meet far more people than I do when traveling with friends when one tends to become more insular. However, without fail, whatever the destination, transport method or whether I am accompanied or not, I always operate with a fair amount of common sense as well as respect for the country, culture and situation that I am traveling in. And that never waivers! 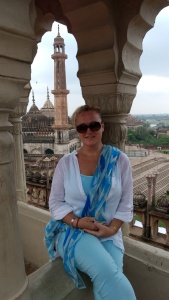 However, this is only my version of being a single lady traveler in India. I started as a spoiled luxury tour operator who initially traveled with the security of a tour operator and local offices behind me.  Then I  moved to India and, having had experience of traveling there used this to help me adopt a bravado which has seen me have few issues.  I have had an extraordinary twenty one years and Iook forward to many many more. I’ve made incredible friends and had fantastic experiences.

Being white can be a huge advantage and it can also (in terms of main destinations where there are a lot of touts) be to your detriment. I have traveled on a budget and I have traveled with female Indian friends and noticed how differently they are treated in some instances to how I am treated. Now, 21 years down the line, also, I am a woman of a ‘certain age,’ no longer a 20 or 30 something and therefore also am starting to be treated differently from how I was when I was younger.   Most recently, I met up with Malini, founder of F5 Escapes, a travel company which caters to the Indian single female traveler who educated me on a whole lot of experiences and factors that I have never had to consider and which was a real eye opener. She is doing invaluable work in this field and I will be featuring her interview in the next couple of weeks.

My summation is that there is no simple category when it comes to being a solo, female traveller. Yes there is a common denominator however, age, nationality and personality are also determining factors. Each single female traveler I am sure we will  have had very different experiences when traveling solo in any country and I would love to hear about these so that a fuller picture of travel is given. I personally have had far far worse experiences in France, Paris in particular, than I have ever had in India or Delhi.  But each person’s travel experience will be unique to them.

But, is travel to India as a solo female traveler safe?  Yes, I think it is but common sense must be used and respecting the local culture is essential.

If you would like to travel to India, Sri Lanka, Nepal or Bhutan, then do explore:  www.iconicandoffbeattravel.com

With over 22 years of experience in selling truly tailored tours to these destinations, my and my team would be delighted to help.