You visit India, you get dragged around the monuments and are given a history lesson at each one. Its baffling and confusing and for me, well 21 years in and I still can’t remember who built what and why. So here you go, Mughal Monuments Made Simple:

Who were the Mughal Emperors and when did they live?

Now when you look at those dates and look at what they built, okay, had built, I doubt any one of them actually lifted a brick, it makes their achievements all the more impressive!  But what were their achievements? Well, now that you ask, here you go: 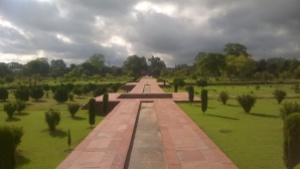 Missing home having arrived in Agra from what would then have been Uzbekistan, he had India’s first Mughal Garden created (1528) which is the much overlooked and sadly rarely visited Ram Bagh in Agra. Do take time out to pay it a visit, it is well preserved and much less hectic than some of Agra’s other monuments.

Interesting fact: The third wife of Akbar (Emperor 3) was a gardener from Ram Bagh.

The emperor that my favourite monument in Delhi was buiilt for, Humayun’s Tomb, which having undergone a wonderful resoration job by INTACH is one of the best monuments to visit in Delhi.  However, during his living years he completed the construction of Purana Qila (started by Shah Suri).

Interesting fact: Ironically, Humayun was actually killed by falling down the stairs at Purana Qila on a call to prayer.

Now this guy could build! He had both the Red Fort in Agra (in its current form) and also Fatehpur Sikri constructed as well as commissioning his own tomb Sikandra.  The fort and Fatehpur Sikri are much visited and wonderful legacies to have, but you really should also take time out for Sikandra, also a deer garden, much less visited and:

Interesting fact: Where it is said, ‘Walls have ears.’ Go and try it out!

Hmm, number four didn’t actually build a great deal, perhaps spending his life exhausted after his father’s efforts. He did however complete Sikandra for his father.  It was his wife Noor Jahan who commissioned a beautiful monument Itmad ud Daula for her father in 1622.

Interesting fact: Itmad ud Daula means Pillar of the State, and it was the first monument to be built of white marble and have the Pietra Dura inlay work.

This is the man we all know, or should, if Indian Tourism is anything to go by, because he built the Taj Mahal. However, he also built the Red Fort in Delhi and the phenomenal Jama Masjid, also in Delhi.

Interesting fact: The Jama Masjid can accommodate up to 25,000 people for communal prayers.

Aurangzeb was more focused on building empires rather than monuments though he did build the Moti Masjid (Pearl Mosque) for his personal use in the Red Fort in Delhi.

Interesting Fact: Aurangzeb assasinated all his brothers and imprisoned his father!

And when you’ve done the monuments, here are some other things you may enjoy in Agra:  https://memsahibinindia.com/2015/11/04/travel-in-india-five-things-to-do-in-agra-which-dont-involve-the-taj-mahal-or-the-fort/

If you would like to travel to India, Sri Lanka, Nepal or Bhutan, then do explore:  www.iconicandoffbeattravel.com

With over 22 years of experience in selling truly tailored tours to these destinations, my and my team would be delighted to help.

Varanasi, Benares, Banaras or Kashi, regardless its not an easy destination.

The changing face of travel.

It reopened today, the first time in six months, o

Someone told me recently that even on my first tri

Did you know? York Minster is home to the only m

It's not the exploring he objects to, nor the impa

Well that's a great way to start the day, for me a

I've been chuntering about wanting to go for quite

Fun on a photography day. Spectacular views over B

We don't tend to do it at any other time of year,

THE red rose whispers of passion, And the white ro

You could deliberately frame it, many have to fuel

Meanwhile back in India, this month's social media

It's 01 Sept, a whole new month and having wasted

Somewhere can be as pretty as a picture but what's

I missed a day, looks like somebody missed me. Mis

An avid explorer, discoverer of the unusual and pa

Fact: I know India pretty well. Fact: This is the

You can take the girl out of India but India will

How often do we look into someone's eyes and see w