The Taj Mahal re opens today, there is no denying that it is a magnificent monument (putting my prejudices aside here!) but if you are  going to visit Agra, take time out to appreciate the city for what else it has to offer, because, there is far more to it than meets the eye and slowing it down is, quite simply, a more sustainable way to travel. 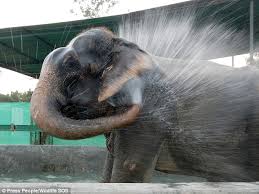 Headed out the same way as Sikandra (travel to Delhi from Agra on the old road and you first come across Wildlife SOS and then Sikandra, visiting from Agra itself it’s in reverse) is Wildlife SOS or the dancing bear rescue sanctuary. Kalandars, a nomadic people, made their living from forcing sloth bears to dance, originally for the Mughals over 400 years ago but more recently, plying villagers, highways and generally anywhere they could make a living. Cubs were stolen from mothers, and they were tortured in order to make them dance but thanks to the excellent efforts of Wildlife SOS, the last dancing bear was removed from the streets in 2009. Of course, they didn’t want to see the Kalandars out of work and destitute and so they initially started by introducing rehabilitation programs education programs for the children and work for the women. It is a wonderful success story, in fact it has been so successful that Wildlife SOS, whilst still caring for the bears, have now set up a new rehabilitation centre, 10 kms away for rescued elephants. At either centre, it is possible to go for a quick visit have a two hour tour or enrol in longer volunteer programs. Book ahead, there needs to be someone to show you around and particularly at the elephant sanctuary, there are certain times when it is better to visit – such as when they take the females for their daily walk.  Check them out on https://wildlifesos.org/

I have spent the last 23 years staying in all sorts of accommodation from the best five star hotels to homestays. They both have their own merits but one thing I have discovered is that if you truly want to get to know a city rather than just visit the main monument, then stay with a local.  I’ve stayed at a couple of homestays now in Agra and it’s wonderful to chat with people who actually live in the city of the Taj Mahal. The ones I stayed at aren’t operating just now but you will be able to find plenty more on line. If you’d like a happy medium, a stay in a hotel but one that is small (boutique if I must succumb to that word) and has a great focus on local experiences then try https://www.ekaahotels.com/

6. Explore with a local.

If you want to discover some of the facets of the city that I’ve mentioned above, plus more, because there is more then there is no better way than to explore with a local tour guiding company. One of the best I’ve come across is one I’ve also been working with to produce virtual tours during the pandemic and their knowledge is outstanding check out: https://www.trocals.com/

Reality Tours also do a full day Agra Tour which includes the Taj Mahal and the fort as well as local village life and lunch with a local family: https://realitytoursandtravel.com/tour/agra-sightseeing-tour/

For a more sustainable travel experiences remember to slow it down, incorporate local experiences and give back to the local economy.

My book, Escape to India is available on Amazon and for every copy sold, INR100.00 will be donated to the NGO’s we support through Indian Experiences and who really need our help during this time. Thank you.

Three hotels in Gujarat which aren’t quite what you’d expect.