You wouldn’t think that finding accommodation in Delhi would be such a mine field, but as a single female, trust me, finding somewhere to live was shall we say tricky. You see, I am torn.  I love Delhi, and to live in Delhi with all of its history and culture, rather than live in the satellite, cultureless, modern city of Gurgaon would be my preferred option.  After all, I moved to India because of the culture but I hadn’t banked on the Victorian principles of the city’s landlords.

It’s strange in a country where the life source of the land and religion, The Ganges is considered feminine and is affectionately known as Ma Ganga or Mother Ganges. Cows, all female are Holy. Female Goddesses are seen as all powerful, look at Kali, Durga, Laxmi and Parvati who are prayed to with fervour yet, for many the attitude towards women is as low as low can be.  Throw being white into the equation and you are automatically assumed to be a women of ill repute.  It is definitely a case of guilty until proven innocent.

I was relatively lucky with my first apartment.  My first landlord and landlady lived in the same complex and, by Delhi standards, were pretty easy going to start with. They were so excited to be the talk of the block, I was the only westerner in an Indian complex and this gave them a certain kudos. Things ticked along quite nicely for the first few months.  However, in the space of one week they turned from easy going into the morality police. Things turned decidedly frosty and I was damned without being given the opportunity to defend myself.

What happened to cause this?

Well, Tuesday saw a dear friend from Jaisalmer (in his 60’s) come to visit. He collected me from my house, took me to dinner and dropped me home again, without coming in, I hasten to add.  Wednesday saw a friend from Bangalore, a rogue to be fair but they didn’t know that, collect me, take me out for dinner and safely drop me home again, without coming in.   This arrangement didn’t even make me think twice, why would it?  Thursday and Friday saw another friend from Rajasthan, the ultimate eponymous gentleman, come to stay for two nights.  He had meetings in Delhi and I had a spare room, so why wouldn’t I offer it to him? Good old fashioned Yorkshire hospitality, or Indian for that matter.  Ok, if I am being completely honest, I have to admit to my intentions in this instance being marginally less than honourable but sadly to no avail.  He remained firmly in the spare room and I remained frustratingly in my room. In the words of Rudyard Kipling, in his Barrack-room ballads “Oh, East is East, and West is West, and never the twain shall meet.”

However, the fact that he not only crossed my threshold but stayed overnight, tipped the boat for my previously 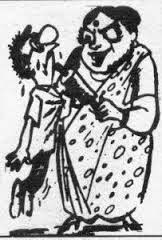 ‘excited to have a western tenant landlords.’  I was told, in no uncertain terms that I was lowering the tone of the neighbourhood and to amend my behaviour or I would be asked to leave.

A few mornings later, I ventured out clad only in my pj’s to break up a fight between my old and my new maid (see Flip Flops at 50 paces). Aghast exclamations were accompanied by the hissing sound of sparks flying off the husbands chappels as the wives dragged them back inside, quickly. More rubber was left on the tarmac than witnessed on the starting line at a Formula One race.

My reputation had been decided, I was Nell Gwyn, Marie Antoinette, Cleopatra, I draw the line at Katie Price, but in short, I was a woman of ill repute.

The search for a new house proved challenging.  Not in quantity nor quality of accommodation, even accounting for all of the landlords who would not even consider taking in a single woman, there was plenty on offer and many I would have happily moved into.  However I then came across previously unheard of, to the western ear at least, stipulations; some landlords wouldn’t allow meat to be eaten on the premises, others wouldn’t allow alcohol to be drunk. Those properties were naturally very quickly dismissed. The list was getting shorter but there were a few landlords who were happy to take a single, western, carnivorous, alcoholic female. I was delighted and felt that we (me and my male, young, cute estate agent) were finally getting somewhere! But then came the house rules stated in Ten Commandment style, and all variations along the same theme:

Did these people have nothing better to do than vet my virtue? I have enough problems with my inability to become a woman of genuine ill repute without this kind of intervention.  This was worse than being back in Victorian England (one assumes), what was a girl to do?

It took a few more days, but eventually I did find a fabulous house. The landlord was great and didn’t live on site. We chatted over chai, even using a little Hindi, he was charmed and I was delighted, he didn’t have any morality clauses. He gave me the keys immediately.

Now I had to find new digs partly due to my previous behaviour and subsequent judgment by those who believed I had behaved far worse than I had.  However, this was also partly because I had also lost my job and the apartment had come with that. What followed is part of the wonderful irony of a country such as India.  You see, I lost my job because I refused to enter into illicit liaisons with my ‘new to the company’ boss.  I failed to see why I should, let’s say it out loud, ‘’have sex with a guy purely because he felt he had to right to, because he was my boss.’’  The fact that he was wholly unattractive helped my decision, as did his halitosis, to say nothing of the fact that he was married and, my boss!

He didn’t take kindly to the rebuff.

I soon found myself unemployed which meant that I was homeless, and that story didn’t end there, but that is for another missive.  However, on the morning when I was due to move in, I had a call from my landlord. He had changed his mind. The reason for this? The man I wouldn’t misbehave with had managed to find out where I was going to live, contacted the landlord and told him that I was a woman of questionable virtue.  The offer of accommodation was withdrawn and I was left sitting in a van filled with my furniture with nowhere to go. The irony, having morals cost me my house.

So now, as I consider moving back to Delhi, the appeal of the history and culture is still what draws me back.  But you see, now there are very smart new apartment blocks, in Gurgaon, which Delhi’s business hub and I am led to believe, has developed a life all of its own. All of these types of problems can be avoided should I choose to live anonymously in a modern apartment block whose landlord, in all likelihood will be as far away as Dubai.  But you see, that is not my idea of India and if I did choose such an existence, what would provide the stories for this blog?